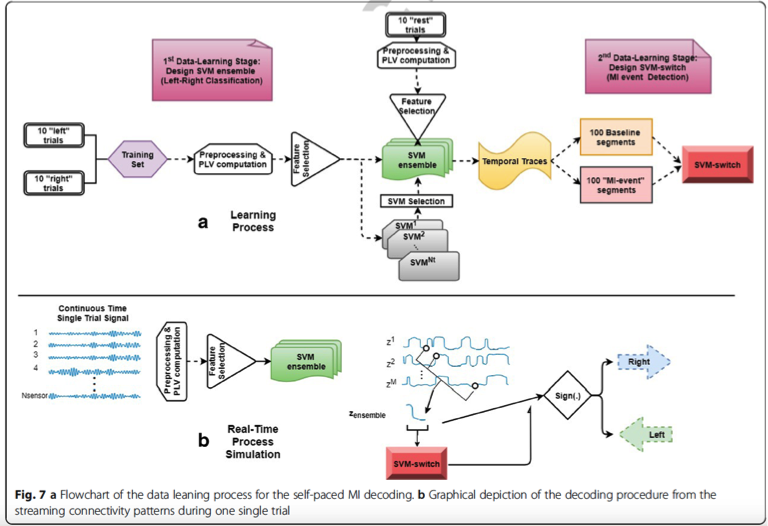 Background: Phase synchrony has extensively been studied for understanding neural coordination in health and
disease. There are a few studies concerning the implications in the context of BCIs, but its potential for establishing
a communication channel in patients suffering from neuromuscular disorders remains totally unexplored. We
investigate, here, this possibility by estimating the time-resolved phase connectivity patterns induced during a
motor imagery (MI) task and adopting a supervised learning scheme to recover the subject’s intention from the
streaming data.

Methods: Electroencephalographic activity from six patients suffering from neuromuscular disease (NMD) and six
healthy individuals was recorded during two randomly alternating, externally cued, MI tasks (clenching either left or
right fist) and a rest condition. The metric of Phase locking value (PLV) was used to describe the functional
coupling between all recording sites. The functional connectivity patterns and the associate network organization
was first compared between the two cohorts. Next, working at the level of individual patients, we trained support
vector machines (SVMs) to discriminate between “left” and “right” based on different instantiations of connectivity
patterns (depending on the encountered brain rhythm and the temporal interval). Finally, we designed and realized
a novel brain decoding scheme that could interpret the intention from streaming connectivity patterns, based on
an ensemble of SVMs.

Results: The group-level analysis revealed increased phase synchrony and richer network organization in patients.
This trend was also seen in the performance of the employed classifiers. Time-resolved connectivity led to superior
performance, with distinct SVMs acting as local experts, specialized in the patterning emerged within specific
temporal windows (defined with respect to the external trigger). This empirical finding was further exploited in
implementing a decoding scheme that can be activated without the need of the precise timing of a trigger.
Conclusion: The increased phase synchrony in NMD patients can turn to a valuable tool for MI decoding.
Considering the fast implementation for the PLV pattern computation in multichannel signals, we can envision the
development of efficient personalized BCI systems in assistance of these patients.