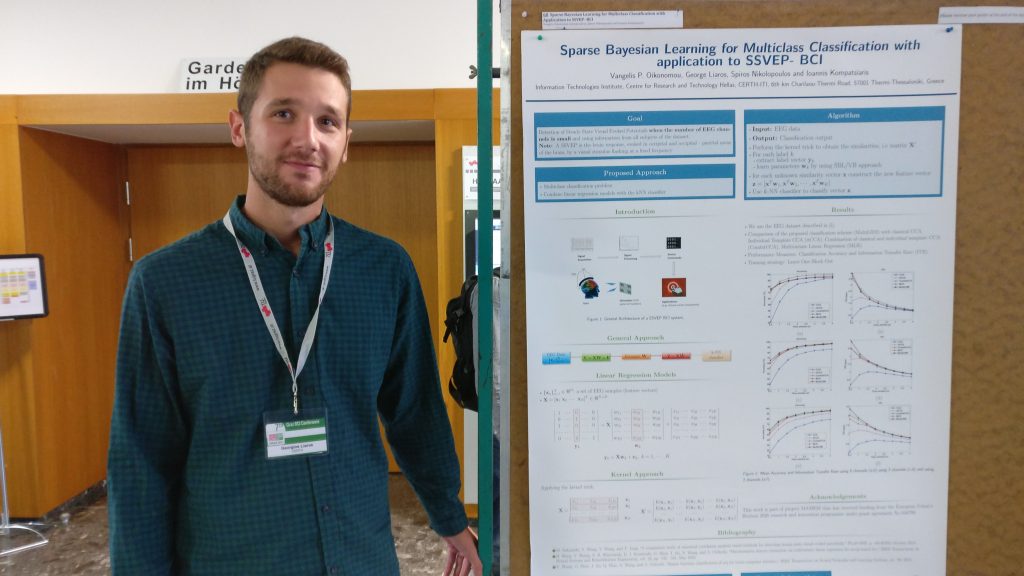 The 7th Brain-Computer Interface Conference which took place at Graz, Austria came to an end. The conference was organized by TU Graz during the 18th-22nd September. The newest developments in the field of BCI were presented in the conference, as well as many ideas were discussed by the participants. MAMEM was also there and presented its work titled “Sparse Bayesian Learning for Multiclass Classification with Application to SSVEP-BCI” which was selected for a poster presentation.

In this work, multiple linear regression models under the SBL framework (namely MultiLRM), are used for the problem of multiclass classification. As a case study we apply our method to the detection of Steady State Visual Evoked Potentials (SSVEP), a problem we encounter into the Brain Computer Interface (BCI) concept. The multiclass classification problem
is decomposed into multiple regression problems. By solving these regression problems, a discriminant feature
vector is learned for further processing. Furthermore by adopting the kernel trick the model is able to reduce
its computational cost. To obtain the regression coefficients of each linear model, the Variational Bayesian framework is adopted. Extensive comparisons are carried out between the MultiLRM algorithm and several other competing methods. The experimental results demonstrate that the MultiLRM algorithm achieves better performance than the competing algorithms for SSVEP classification, especially when the number of EEG channels is small.